"what do you give the person who has everything?"

We have been in business since 1995, taking pride in each and every order. We are open Monday to Friday 9am-5pm and on weekends we will also take orders!

Our founder Lisa Gal, worked in the entertainment industry for a few years before her basket making talents became apparent. She saw there were very few companies that catered to the entertainment industry, as far as unique gifts were concerned. She then volunteered to put together the gift baskets for the company she worked for. It continued to grow, the ad agencies began calling to place orders with her. Thus HOLLYWOOD BASKETS was born. We now have a full staff of designers, ready to assist you with your orders, however large or small. If you are calling from a studio, ask about our house accounts, as we have accounts with many of the major HOLLYWOOD STUDIOS. 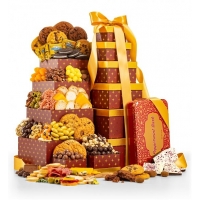